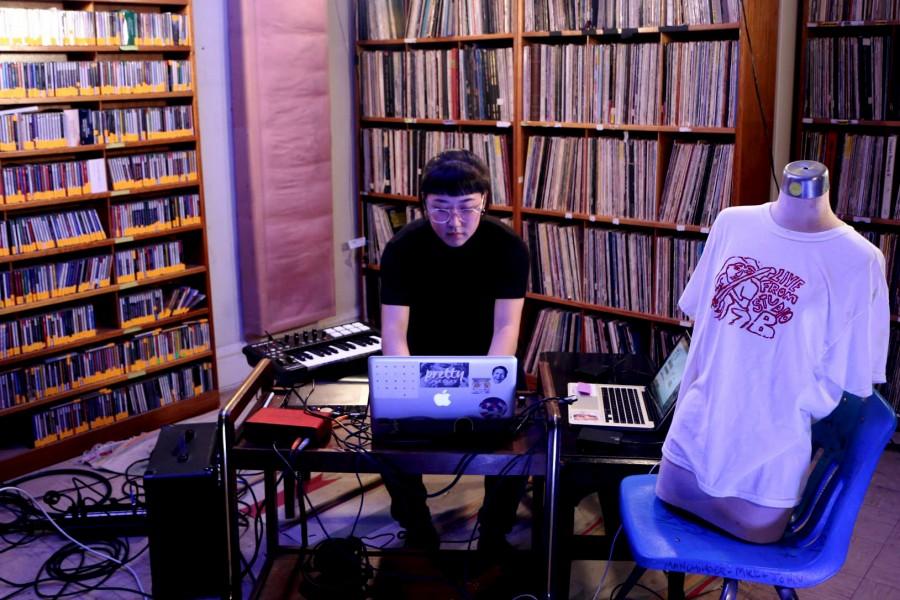 Courtesy of Studio B

Double-degree junior Sarah Snider manipulates sound equipment in the Studio B space on October 4. The WOBC offshoot has pushed to make its resources more accessible this semester by planning “non-dude” workshops and skill-shares.

Located adjacent to WOBC on the third floor of Wilder Hall, Studio B is a small yet rapidly growing music radio station intent on expanding its role within the Oberlin community. It functions both as a performance space — the weekly show Live from Studio B features sets by student bands — and a place for musicians to record and learn the technical aspects of music-making in weekly work groups. Although Studio B has been around for longer, it only became a more structured space to showcase both local and touring talent in the last three years.

Studio B co-producer and College junior Rob Jamner said that Studio B provides unique resources for students. “It’s sort of one-of-a-kind on campus as an opportunity for musicians to perform live on the College radio station,” he said. “I’ve been on both sides of it. It’s really such an incredible experience.”

Videographer and video editor for Studio B and College junior Harley Foos said having the show as a space for both student and touring bands to showcase their music is important. “It’s an exciting opportunity for students to be on the same platform as a touring band that they might admire,” she said. Studio B producer and College sophomore Becca Winer also said Studio B is valuable for smaller artists. “It’s mostly a resource for student and local bands,” she said. “There is great quality audio and video that is professionally recorded. … [We make] high-quality, free products of their performance. And our producers get credits for working on it.”

Jamner also sees involvement with Studio B as an opportunity to gain industry knowledge. “I’ve learned so much from just having time in the studio to work on things,” he said. “This is an experience that can translate to something beyond college.”

Jamner said the popularity of the studio is also growing. “It’s definitely getting bigger,” he said. “We have a larger staff this year than ever before.” With more hands on board, Jamner hopes to pursue social and musical changes through Studio B. “We can definitely improve on solidifying how we advertise and how we accept our performers, so we can make it a space that promotes everyone and is accessible as possible.”

Foos shared similar sentiments. “We are traditionally limited in terms of genre,” she said. “We are trying to bring in a cappella, OSlam and other performance groups that aren’t just indie rock or punk bands.”

These issues extend beyond broadening the range of music genres covered, as Studio B staff also said they hope to increase the gender diversity and inclusiveness of the program. Winer said the Studio is working on making the space and resources more accessible to “non-dudes,” a term she uses to describe those who are not straight white men. Yet she also said creating an open environment and getting more people involved is difficult. “With the nature of Studio B — having so much expensive and advanced equipment that we need to keep safe — we have a lot of technical skill that’s needed,” she said. Because of the knowledge required to use the equipment, Winer said Studio B is sometimes viewed as an “exclusive, mysterious thing.” Adding to these challenges is the constant shift of leadership within Studio B. Institutional memory is often lost when students running Studio B graduate. These difficulties aside, Winer is optimistic about achieving goals of greater accessibility. “We’re trying really hard,” she said. “We have a lot of programs in the works and conversations that are starting to happen.” Studio B is working on creating a weekly “non-dude” training program and creating a “non-dude” sound committee to hold workshops and skill-shares for “non-dude” artists.

In addition to increasing accessibility, Winer said Studio B is getting more involved with other organizations outside of the realm of WOBC. “We’ve been talking a lot with Pretty Records, which is the new label [double-degree junior] Sarah Snider started for non-dudes,” she said. “We’ve offered them a recording space and have been trying to help in any way we can. We’ve perfected the live element of Studio B, so now we have this studio six other days a week. [The question is,] ‘What are we going to do with it?’”

Foos also touched on changes she wants to see implemented at Studio B to make it more visible. “Something we’ve been talking about is building the Studio B brand,” she said. “Not just Live from Studio B, but actually doing music videos for touring bands. Also, more merchandise and more visibility. We’re also trying to do more events.”

Studio B is expanding its role both within and outside of the Oberlin community to act as a platform of support for musicians that operates outside limitations on genre and gender. Although there are challenges in doing so, Studio B’s increased use of training groups and collaborations with other organizations have demonstrated the beginnings of promising change. “If anyone is out there with a project or an organization that wants to collaborate with us,” Winer said, “we would love to get in touch.”