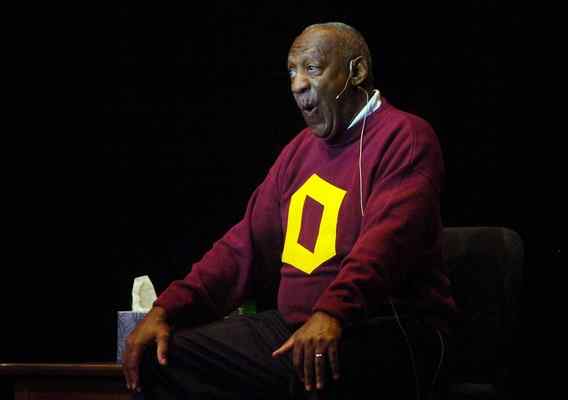 Bill Cosby talks about his early interest in jazz music at Finney Chapel on April 30, 2010, as part of the Conservatory’s celebration weekend for the opening of the Kohl Building. Cosby received an honorary degree from Oberlin that weekend, but many students are calling for its retraction in light of the rape allegations against him.

Since the controversy over Bill Cosby’s alleged rape of dozens of women began, nine schools have rescinded Cosby’s honorary degrees. Oberlin is not one of them.

Instead, the College is one of many schools in the process of reviewing official policy on honorary degrees. Oberlin College gave Bill Cosby an honorary degree in 2010, one of the comedian’s nearly 60 such honors.

In a recently-opened 2005 court deposition, Bill Cosby admitted to giving women Quaalude, a sedative drug, in order to have sex with them. As of now, 55 women have publicly stated that Cosby drugged them without their knowledge and subsequently raped them. In his 2005 deposition, Cosby showed a faulty understanding of the meaning of consent.

“I don’t hear her say anything, and I don’t feel her say anything,” he stated, in reference to alleged inappropriate sexual conduct. “I go into the area that is somewhere between permission and rejection.”

The College bestowed the honorary degree in 2010 to celebrate the opening of the Bertram and Judith Kohl building. An informational page still up on the official Oberlin website details Cosby’s “illustrious list of accomplishments” and his “philanthropic efforts and positive influence as a performer and an author.”

The Administrative and Professional Staff Council, a group of nonfaculty, non-unionized College staff, recently submitted a formal request that the Board of Trustees revoke Cosby’s degree.

“In light of Oberlin College and Conservatory’s long tradition of supporting social justice and gender equality, as well as its ongoing commitment to education about and the prevention of sexual misconduct, the A&PS Council respectfully requests that the General Faculty Council and Board of Trustees explore and pursue the revocation of the honorary Doctorate of Humanities awarded to William J. Cosby,” the group wrote.

According to Clyde McGregor, chair of the Board and OC ’74, the Board considered the request carefully before declining to take action at the meeting.

“While the Board ultimately declined to take action at this time, it will continue to monitor the situation closely,” wrote McGregor in a post on The Source.

Oberlin has no defined policy in place regarding the removal of honorary degrees and has never revoked an honorary degree before. The Cosby case would therefore set a precedent for how the College will respond to similar situations in the future.

Many other liberal arts colleges similar to Oberlin, such as Carnegie Mellon University and Colgate University, are also in the process of reexamining Cosby’s degrees. Carnegie Mellon posted an official update on the proceedings, stating that, while the school has been engaging in “internal discussions regarding Bill Cosby’s degree,” it has “not made a decision at this time.”

However, many schools have chosen to act. Christina Paxson, current president of Brown University, explained the school’s decision to revoke the degree, saying that, “Mr. Cosby has engaged in conduct with women that is contrary to the values of Brown and the qualities for which he was honored by the University in 1985.”

“Revoking Cosby’s degree does little to address the casual and institutional misogyny and male entitlement running rampant on college campuses today, but the symbolic weight of such a decision might serve to reinvigorate the conversations surrounding Oberlin’s commitment to gender equality, inclusion and diversity that was started by the GSFS petition earlier in the semester,” said Megs Bautista, College senior and Student Senate liaison. “Clearly, Oberlin has a lot of work to do if it wants to stay true to its legacy.”

According to College first-year Kameron Dunbar, the College must revoke Cosby’s degree to reaffirm Oberlin’s values.

“The revocation of his honorary doctorate would send a message to our community, and the world, that this type of behavior will not be tolerated and certainly not rewarded by Oberlin College,” Dunbar said.

College first-year Claire Rasmussen agreed. “It’s outrageous for an institution like Oberlin, which prides itself on its compassion, to not have rescinded this degree,” Rasmussen said.

Several members of the administration declined requests from the Review for comment.