In the Locker Room with Tom Reid 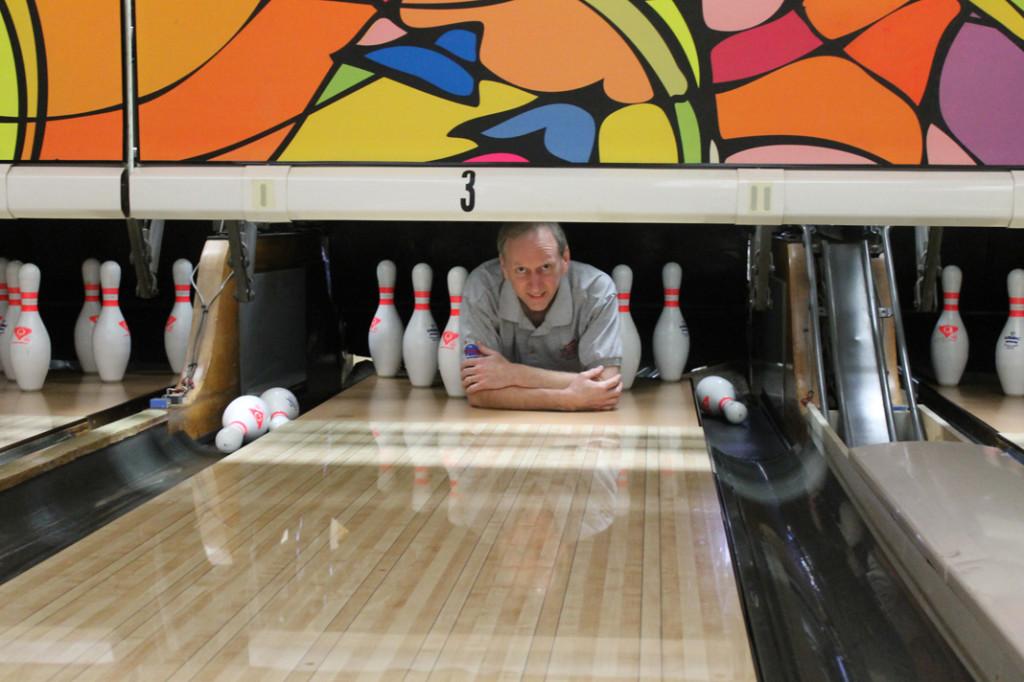 This week the Review sat down with Bowling I and II teacher, Tom Reid, to discuss Reid’s long tenure at Oberlin, how he started bowling and what you need to do to take his class next semester.

When did you start bowling?

Tom Reid: I started bowling fall of 1973. I was 15. My church formed a bowling league and I asked my parents if I could join. I expected them to say no but they said yes. I was always picked next to last in gym class. I had a friend who was one of those naturally athletic people, and he joined the league also, and on the first night, I beat him. On the second week, I beat him again, and that’s when I thought, ‘Hey this might be my thing.’

What makes bowling a great sport?

TR: On the face of it, it’s pretty stupid. Let’s face it: You’re rolling a ball at some sticks and what’s the point of that? I feel a little weird because right next door to the bowling center is a hospital where they’re trying to save people’s lives. [But] there are some very real things about it. One is the human connection. Bowing provides that. In a team setting, you have comrades that are out there fighting pin wars with you. The movie The Big Lebowski shows how bowling can help strong bonds develop between people who otherwise would have nothing to do with each other.

When did you start teaching a bowling class at Oberlin?

TR: Spring of 1993. When I started managing the lanes in the fall of 1980, I went to the athletic director and offered to teach the classes and the response that I got was that there were people in the department who felt I should have a teaching degree to teach the class. So, for the next 13 years, I just sat behind the counter and passed out shoes and sometimes would wince when someone teaching the class would give a piece of advice that seemed unsound. Then, in fall of ‘93 they came to me and said, ‘Tom, we don’t have anybody to teach the bowling class.’ That fall semester, every night before class, I stayed up until two or three in the morning getting the lesson plans in order.

Do you have any special articles of clothing that you wear when you bowl?

TR: Are you recording this? There’s one thing I need to say: ‘Hi Mom!’ I’m sorry to report that I do not have a lucky pair of socks or a lucky pair of underwear. I wear slacks and never jeans, and also short sleeves. I always do wear my lucky bowling shoes. If you don’t wear ‘em, you slip and fall down.

How do you keep a fresh perspective about Oberlin despite being here for so long?

TR: This is actually my 38th year on campus. I’m in my 75th consecutive semester here at Oberlin College. Thank you for assuming that I do have a fresh perspective. I’ve been teaching the class for 20 years and sometimes I do get tired of going through the same routines year after year, and yet, each student that comes into that class, it’s their first time. They’re having this exciting new experience taking bowling. I feel I owe it to them as an individual to give them something to be excited about it.

Are there any professional bowlers who you’ve tried to emulate?

TR: Yes, and it usually works out pretty disastrously. When I was first starting out, the [Professional Bowlers Association] telecasts were on Saturday afternoons as the lead in to ABC’s Wide World of Sports and I bowled in a Saturday night league. That was pretty cool. You’d watch the professionals bowl and then go out to bowl and I bowled better in that Saturday night league than I had in any other. There have also been times where I’ve seen a bowler do something and said, ‘I’m going to try to do that,’ and it didn’t work out so well.

Do you have any bowling superstitions?

TR: I can reason my superstitions away. If someone has left a split on the next lane, you don’t bowl until they have taken their next shot and gotten that split off of there. If you don’t wait, your likely to leave a split yourself. I also wipe my ball off before any strike attempt and that’s really not for the purpose of getting the oil off the ball. To me, that’s a focusing mechanism.

What do you think about The Big Lebowski?

TR: It’s been very good for us because it’s encouraged a lot of people to take the class and take up bowling in general. It shows how bowling can help one remain centered when everything else in your life in swirling out of control. The thing I don’t like is that it makes bowling seem easy. Aside from one time, every time you see someone roll a ball, every pin that is standing is knocked down.

Did you ever consider being a professional bowler?

TR: That was my plan. When I took the job managing the lanes here, it was only going to be for a few years before I went out on tour. It turns out that if you want to become a professional bowler, maybe you should not run a bowling center, because there’s so much work in that, that you don’t get to spend enough time honing your craft on the lanes. Maybe that’s just a cop-out and it’s an internal character flaw or a lack of physical or mental giftedness.

You’ve bowled three 300 games in your life. Does one stick out more than the others?

TR: Before I shot my first 300, I had four 299 games, and of course the only way you can get a 299 is by bowling 11 consecutive strikes to start the game and nine pins on the last shot. All four times, I made a pretty good [last] shot and three times I left the 10 pin and once I left the seven pin. The next time I started the game with 11 pins, I totally choked. I sent the ball way over to the wrong side of the head pin and the pins just knocked each other down. I didn’t know how to feel. I rolled the worst shot I ever rolled in that situation. The next two 300 games had 12 good shots.

What would you say to people thinking about taking your bowling class?

If you could go back to one year in history, what would it be?

TR: I suppose what I’m supposed to say is that I’d go back to now because life keeps on getting better and better. 1968 was pretty cool, but there was also a lot of horrible stuff going on. I was 10 in 1968, so I got to enjoy all the good music and cool parts of the counterculture without really being aware that it meant that people were rioting in the streets. Any place where there’s great debate about historical truth, I want to go back and see what really happened. I’d love to have that role.