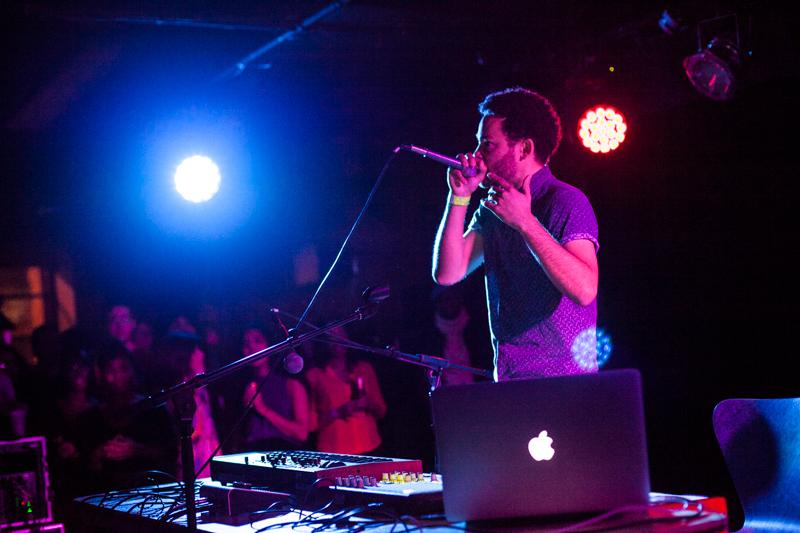 Taylor McFerrin croons to an energetic audience Thursday Nov. 12 at the ’Sco. McFerrin’s music contains elements of hip-hop and neo-soul in addition to jazz.

Almost everyone at Taylor McFerrin’s show last Thursday danced through the night. Warmed up and ready, McFerrin had no difficulty energizing dancers with neo-soul and hip-hop beats. The Brooklyn-based DJ, producer and singersongwriter certainly proved that he does not need to ride on the fame of his father, vocalist and conductor Bobby McFerrin, to achieve success in the future.

If Taylor McFerrin ever grappled with living under his father’s shadow, he definitively stepped out of it with the release of his first album, the Early Riser EP, in June of last year. Released on Flying Lotus’ label Brainfeeder, the album includes collaborations with artists such as Thundercat and Robert Glasper and features vocalists Nai Palm and Emily King. While jazz is unmistakably a big part of the McFerrin sound and shapes many of his tracks, what makes his music stand out is the intriguing infusion of contemporary styles he brings to the genre.

McFerrin opened his set at the ’Sco with two exciting improvisational cuts. At the end of the second, which led into the Emily King collaboration “Decisions,” he started showing off some of his excellent beat-boxing skills. The song stood in pleasant contrast to the two high-energy opening songs and left a lot of room for King’s voice. McFerrin sought to highlight the talent of his collaborator over his own. Nonetheless, the attendees seemed captivated by the undeniable beauty of the arrangement that swirled around them.

One of the most memorable tracks on the EP, a collaboration with Thundercat and Glasper titled “Already There” was even more outstanding live and was one of the best tracks of the set. McFerrin briefly touched upon the influence of Thundercat and Glasper in the development of his own sound after the set, when he talked to a few students as they waited for him to sign their copies of his album.

McFerrin then moved toward Early Riser’s calmer tracks. He played “Place in my Heart,” featuring RYAT, a song driven by soft keys and drums. The song leans a little too much on the lower-tempo side of his music, leaving listeners with relatively little to remember. But while that song saw less success than the others, the energy picked up again with the next two tracks. These songs transitioned from catchy drums to upbeat house music patterns, recapturing the earlier vibe of the set.

The last few songs were particularly pleasing. Many parts of these songs were also improvised. They took surprising twists and turns, merging hip-hop rhythms and funky keyboard melodies. Whenever the audience seemed to lock into one rhythmic pattern, McFerrin had already moved on to the next one. It was impossible not to dance along with his music’s rhythmic complexity.