In The Locker Room with Sabrina DeLeonibus, Olivia Canning and Sarah Feinberg 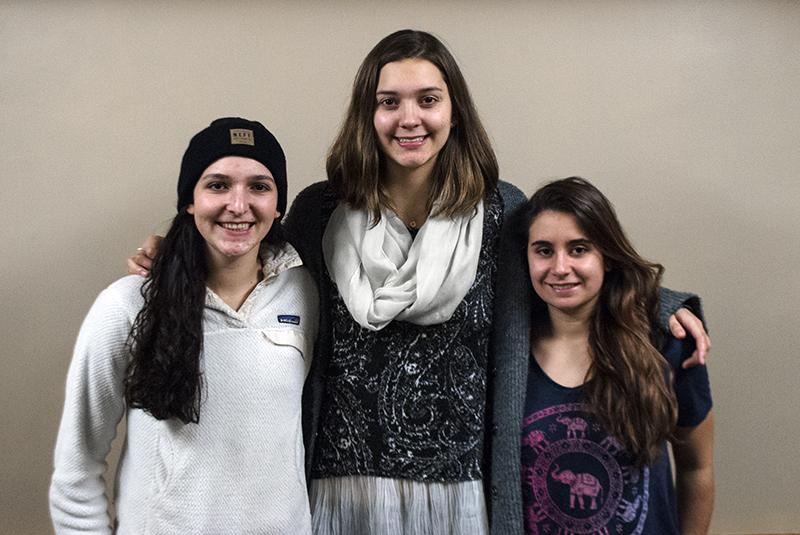 This week, the Review sat down with first-year women’s basketball players Sabrina DeLeonibus, Olivia Canning and Sarah Feinberg to discuss their high school careers, first impressions of Oberlin and their preparation for the season.

How have you enjoyed your time at Oberlin thus far?

Sabrina DeLeonibus: I love it. I think it gives me a perfect opportunity to express the different interests I have on and off the court. It’s academically challenging, it provides an outlet for me to express myself in music and at the same time it gives me a family to turn to during basketball season.

Olivia Canning: It’s good. I like it so far. From the basketball team to the people to the academics, everything has been great.

Sarah Feinberg: I love being here. The team and the coaching staff have been super supportive on and off the court, and so far we’ve all really bonded.

How’s the season going so far?

SD: The season is going well so far. We’re going to have a good season. The energy is up, so no matter what happens, we’re going to be a solid squad.

OC: It’s been good. The team has definitely bonded, and I think we’re coming together more and more every practice.

SF: So far it has been pretty good. We definitely have all the pieces that we need to be successful; now it’s just a matter of

putting everything together and playing at the high level that we know we can achieve.

What made you decide to go to Oberlin?

SD: My interests were split in three ways: music, academics and basketball. This particular school happens to offer all three, so it seems to be a perfect fit for me.

OC: A lot of things appealed to me about Oberlin. But I think, though, that the basketball team definitely convinced me to come here.

SF: The team was definitely the biggest thing that stood out for me. They’re such a great and supportive group of people. When I came on my official visit and stayed with them, I called my dad that night and told him that this was the place that I wanted to go.

OC: I once lost the ball while at the foul line. Everyone was staring at me and the ref had to go get me the ball.

SF: Definitely a tie between playing against my younger brother’s high school team and winning and finishing the season 24–10 — one of the best seasons in recent program history.

SF: I would say “679” by Fetty Wap, but my team would probably say “Big Rings” by Drake and Future.

What are some of your thoughts about Coach Kerry Jenkins?

SD: I think he’s a very caring individual, and he’s a winner; that man just never wants to lose.

OC: He is really encouraging. He has a lot of motivation. He knows his basketball.

SF: I like how he holds us accountable on the court. He definitely stresses the importance of our academics, but I like how he makes basketball our number one priority.

What did you do to prepare for the season?

OC: I worked out a lot over the summer, including cardio and lifting. Also, the first couple weeks of practice we would run all the time to improve conditioning.

SF: I worked out three times a week with a personal coach and played with my brother, and I made sure to lift on the side as well.