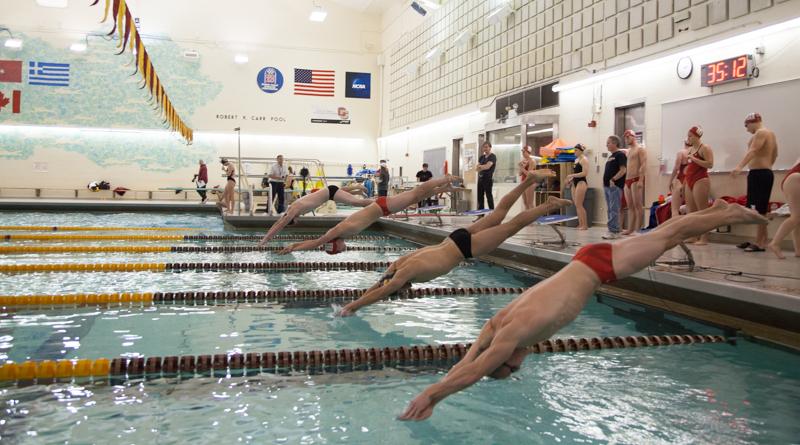 Two Yeomen catapult off the starting blocks in Oberlin's dual meet against the Wittenberg University Tigers Saturday, Nov. 14. The swimming and diving team anticipates competitive races across the board at the Fredonia Invitational this weekend.

After recovering from a strenuous double-dual meet at Allegheny College against the Allegheny College Gators and the Malone University Pioneers on Nov. 21, the swimming and diving team is ready for its three-day invitational in Fredonia this weekend.

The Yeowomen returned home from Meadville, PA, with wins against both of their competitors, topping Allegheny 160–34 and earning a commanding win of 178–109 against the Division-II Malone. The Yeomen didn’t see the same success, suffering brutal losses of 185–87 to Allegheny and 165–97 to Malone.

Head Swimming and Diving Coach Andrew Brabson attributed this discrepancy in results to the Yeomen’s low numbers this season, but felt that the Yeomen performed to the best of their ability.

“Even though the men don’t really have the depth to compete with those two teams, I thought their performances were solid,” Brabson said.

Brabson added that the away meet wore on the team as a whole, making the women’s team’s performance all the more impressive.

“It’s always difficult when you’ve got a two-and-a-half-hour bus ride anywhere, so I think they responded really well to that,” he said. “With a pool and travel conditions that aren’t necessarily the best, I think they all performed really well, especially given the tough training we’d been doing at that point in time. So for the women to come away with two wins on that, especially with a [Division-II team] like Malone, I was really happy with that.”

The Yeowomen started the day out strong with a victory in the 200-yard medley relay, the first race of the meet. Seniors Lauren Wong, Dierdre Haren and Jill Sarazen and first-year Elsa Mark-Ng finished in 1 minute, 56.47 seconds.

First-year David Bright and senior Benjamin Miyamoto brought in first-place titles for the Yeomen, with Bright in the pool and Miyamoto on the boards. Bright beat out the Gators and Pioneers in the 100-yard breast stroke in 1:01.29, while Miyamoto claimed victory on both the 1-meter and 3-meter dives with 212.40 and 221.10 points, respectively.

Regan cited Coach Brabson’s different training style this year as a reason for the team’s success.

“We’ve been training really hard, I think more so than last year,” she said. “[Coach Brabson] has been trying more quality work and not so much quantity work, so not long yards, but working more towards your races.”

Brabson agreed, adding that he’s been coaching his team to see dual meets more as training opportunities than competitions.

“We’ve done a lot of tough training,” he said. “These last couple dual meets, we’ve been using those types of swims as learning experience to get ready for this weekend, where they’re going to have more rest and be prepared to swim pretty fast.”

The team’s practice focus, according to Brabson, has also been much more technical this year. Brabson cited pacing, turns and techniques for different strokes as some areas he has been emphasizing.

Cooper said she felt that dialogue with Brabson on these technical aspects has really helped the team improve, in addition to exercising more responsibly.

“[We’ve been] pushing towards faster intervals and less active recovery,” she said. “[Coach Brabson] has been great about identifying areas for improvement. For example, if he notices our flip turn mechanics are off during a meet, we’ll work on them the following week.”

Both Regan and Cooper are looking forward to swimming after ample rest, which has been in short supply this season. They hope to beat their personal records and watch their teammates do the same.

“Our team has shrunk since last year by a lot, specifically the women’s team, so we have very little depth,” said Regan. “We’ve been having trouble with bigger teams because multiple people can swim [for them], whereas we have to swim three events in two hours, which is really tiring.”

For this reason, Cooper believes that the length of the Fredonia Invitational — which spans over three days instead of one or two — will test the team’s positivity and resilience.

“This weekend presents unique challenges, given the fact that it is a three-day meet that simulates our conference meet schedule,” she said. “Because it’s such a long meet, one of our team’s goals will be to maintain good energy levels and a positive mindset on deck. It’s especially important to support each other when everyone might be tired or sore on the last day of competition.”

The Yeomen and Yeowomen will begin day one of the Fredonia Invitational Friday at 4 p.m. in Fredonia, NY.