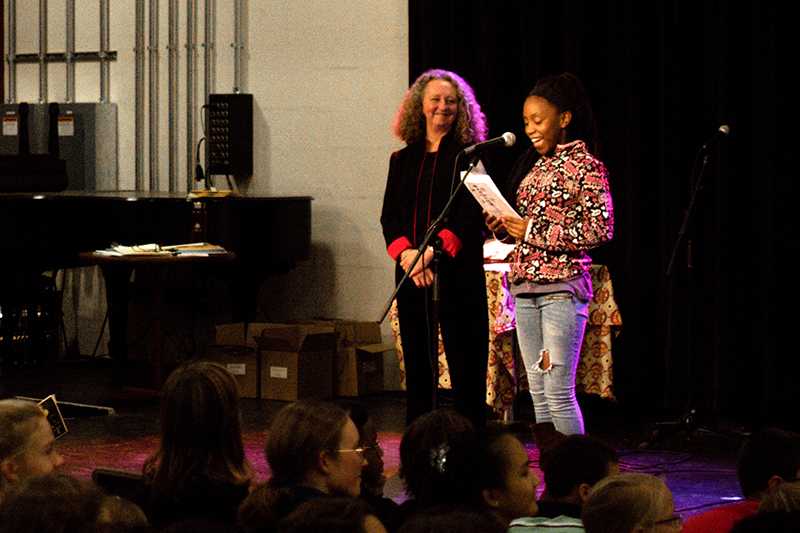 Seventh-grader Leo Carter read his poem “Sequoia Trees” at the Langston Middle School poetry reading and book launch at the Cat in the Cream Monday. “So tall, it looks like they could / shishkabob the sky. So wide, / the shadow is like an eclipse / over the ground,” Carter read. His poem, part of Barbara Stadler’s class anthology, “As Deep as a Submarine Can Go,” was created in one of several 10-day residencies in sixth, seventh and eighth grade classes led by Director of Oberlin’s Writers-in-the-Schools Program Lynn Powell and Oberlin College students in Powell’s 400-level Teaching Imaginative Writing course.

While the Teaching Imaginative Writing class has been offered since 2010, this year the class has become the foundation of the Writers-in-theSchools Program, which was approved by the College in June. Powell said the new program, which was piloted last semester, will allow students who took the course in the fall to continue to teach writing in the schools during spring semesters for practicum credit. While piloting the program, Miryam Coppersmith, OC ’15, taught a 7th grade fiction residency, while Elena Jackendoff, OC ’15, and College senior Sarah Goldstone taught an 8th grade collaborative jazz and poetry residency, among other projects. Powell said this gave the College students an opportunity to further explore teaching topics they were passionate about. “I did a little of the teaching, but not as much, so it really gave a chance for those students to take a step forward into leadership and in imagining the way,” she said. “We’re doing things such as exploring: Could we perhaps have a spoken word club? Could we do a comics residency?”

In the class itself, College students learn how to create well-constructed lesson plans with the intention of stimulating middle school students’ creative imaginations. Powell also said that while the class focuses on pedagogy, it is not a theory course and instead focuses on a learning-by-doing approach. “I come to this as a practicing artist in the school who has taught a lot in the schools, so it’s kind of an apprenticeship in that trade,” Powell said.

After College students read about 100 pages of successful lesson plans and 50 successfully taught poems over the summer, they were ready to start workshopping their own lesson plans early in the fall semester. Powell said that coming to a classroom well-prepared is essential for making sure the middle school students gain insight into their own creative abilities. “We critique and give feedback and talk about the issues that that lesson raised, and it’s pretty hard-hitting because the stakes are high,” she said. “The stakes are a lot higher than workshopping a poem. [If a] poem didn’t work successfully for everybody, it’s not going to be the end of the world, but you’re about to go in there and teach to 20 middle school kids, and my feeling is that we’re on a mission to give those kids something… we actually believe in, [and that] is valuable at this soul-deep level, and we don’t want to blow that. … We want them to come out feeling empowered by their imaginations and by their voices.”

College senior Becca Orleans who took the class with Powell this semester, said that she taught two Jacqueline Woodson poems to her students because she thought that Woodson was an excellent role model. “The first poem we read by her was called ‘Reading,’ and it was about how she had trouble with reading growing up,” she said. “She had her own way of doing it, where she would read the same stories over and over again until they made sense to her. I thought that was a really good role model… because here’s this really famous poet who’s won all these awards, and when she was growing up, reading was really hard for her. The poem starts with ‘I am not my sister,’ so we wrote about things we do our own way or things that make us different and being proud of those differences, so they all started with, ‘I am not.’”

However, while Orleans was the teacher, she said she also learned a lot from her middle school students. “[The middle school classroom] is different to me in atmosphere [since] all [the students] want to do is encourage each other’s poems,” she said. “Just the way that they think is really cool — unafraid to make these crazy comparisons. This one [sixth-grade] student, Roman [Bynum-Robinson], wrote, ‘If there is no more joy, / put your attitude in space.’ Some of those lines like that, I just kind of stop and think, ‘Wow, how are you seeing the world right now? I wish I could.’”

The middle school students themselves said they also enjoyed learning from Powell and College students. Sixth-grader Katherine Doane said she liked how the College students created an open atmosphere for the middle school students to be creative. “One of the things that I enjoyed about the poetry classes is that they gave enough freedom,” she said. “It wasn’t like freedom so that it was disorganized or anything — it was actually freedom to let us write and actively express some of our own ideas.” Sixth-grader Cody Slimak agreed. “I liked how they were so open, and they would give us a topic and we could freely write whatever we want off the topic,” he said.

Seventh-grader Tessa Newson said the prompts College students provided helped spark her imagination. “I got inspiration from one of the poems they read to us,” she said. “One of the lines is ‘sweet brown-sugar love,’ and I love that, and I just kept on adding on to that idea.” Sixth-grader Lily Peterson said she also enjoyed hearing what her classmates created. “My favorite part was probably everyone reading their poems at the end of class,” she said.

The reading at the Cat in the Cream acts as a celebratory culmination of the residencies taught by the College students, and it continues to be a space where the College and community gather to enjoy a night of poetry. The middle school students were proud to perform their poems in front of their families and friends. “I liked the poem I chose because of the wordplay that I did. It sounded really good,” Newson said. Slimak was also proud of his poem. “I chose to read my poem because I loved the last line. It was such a truthful line, like a ‘bam!’ moment,” he said.

Orleans said she will continue teaching the middle school students in the spring through the new WITS Program. “It’s almost like once I got that experience of being in the middle school and getting to know those kids, I can’t really imagine a college experience without them,” she said. “I do learn so much from them and feel so good every time I go in. … I just want to keep working with them and keep spending time with them and see what other amazing things they can do.”