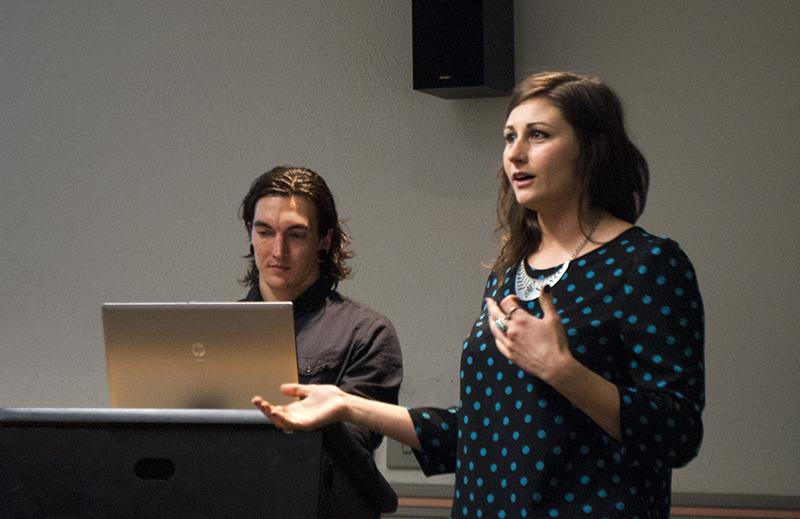 “Isn’t it hard to be a vegan athlete?” “Where do you get your protein?” These are the sorts of incredulous questions Sustainable Technology Coordinator Samuel Hartman and Sustainability Coordinator Bridget Flynn set out to answer once and for all in their second talk of the year on vegan athleticism last Tuesday.

The pair mainly emphasized the ease with which they gain the necessary nutrients, even protein, on a plant-based diet. Flynn was quick to debunk the common misconception that veganism was an irresponsible choice for serious athletes due to the lack of protein through meat and animal products.

Hartman and Flynn ensured that their presentation was accessible to the entirety of their eclectic audience of vegans, athletes and people unfamiliar with either topic, making sure to explain all technical terms involved in both concepts.

“It’s probably easier than you think,” Flynn insisted, rattling off the amount of protein in a half cup of black beans, a half cup of tempeh and a half cup of seitan, which contain 7.6 grams, 15 grams and 31 grams, respectively.

Hartman, a veteran vegan of 10 years, and Flynn, who has been a hardcore herbivore for nine years, have both engaged in heavy athleticism throughout the past decade. Together they have accrued an eclectic list of athletic experiences. Hartman has some amateur road bike races under his belt, while Flynn has dabbled in Tough Mudder races and taekwondo. Currently, Hartman is focusing on Olympic weightlifting and Flynn is a figure bodybuilder looking to compete again in 2016.

The presentation and discussion, sponsored by both the Office of Environmental Sustainability and Oberlin Animal Rights, was a derivative of the talk the two Oberlin employees gave to Harkness Co-op athletes last year. The talk served as a response to doubts that the co-op members could make veganism work with their athletic goals. The discussion was a hit with Harkness athletes, and the success inspired the duo to open up the discussion to the rest of Oberlin’s campus.

In a brief aside, Hartman explained that there are nine essential amino acids — the compounds that form proteins — and countered the myth that these essential compounds are only found in meat. He explained that anyone could cobble together a full set of nine with a varied diet of plant proteins.

Another myth busted by the talk was that meat and animal products are the sole available sources of important vitamins and minerals. They cited soybeans, spinach, molasses, quinoa and even dark chocolate as having significant iron content, and soymilk, tofu and cereal as some B12-fortified foods. Chia seeds, flax seeds and seaweed all provide Omega-3 and Omega-6 fatty acids.

Along with these natural foods, Hartman and Flynn stressed that there are many easily accessible non-meat, non-dairy supplements that might help not only with nutrition but also with diversifying the taste of one’s dishes. Tofurky, Teese, Rice Dream, Vegenaise, Amy’s Kitchen and Daiya are all brands that made the list, although Flynn was quick to admit that she mainly prefers natural foods instead of substitutes and has done just fine without them.

Discussion turned towards lifestyle questions when the vegan duo opened up the floor to the audience.

They addressed topics such as traveling as a vegan, how to start bodybuilding and superfoods. On so-called superfoods, like quinoa and açaí, Hartman said that they are simply foreign foods that have been marketed well, and while he conceded that they taste good and have nutritional value, they aren’t worth their hype.

“They’re not worth paying a premium for,” he concluded.

On being vegan while traveling, Flynn stressed being polite and respectful but also assertive about dietary restrictions.

“Do your research,” she said. The pair advised learning a few key phrases in the language of wherever you are traveling to make communication easier and mistakes less frequent. On this point, the presenters were met with widespread agreement from the audience.

“It’s very possible to just be vegan,” one audience member called out.

Both Hartman and Flynn enthusiastically encouraged their audience to go to the gym and to get involved in athleticism. Flynn shot out several helpful websites and insisted that no one should be too intimidated to go to the weight room.

“Probably half the people in the gym don’t know what they’re doing either,” she said.

On the way out of the presentation, students could grab a coupon for a free Tofurkey product at the Oberlin IGA, as if Harman and Flynn were telling the audience, “If you don’t believe us, see for yourselves.”