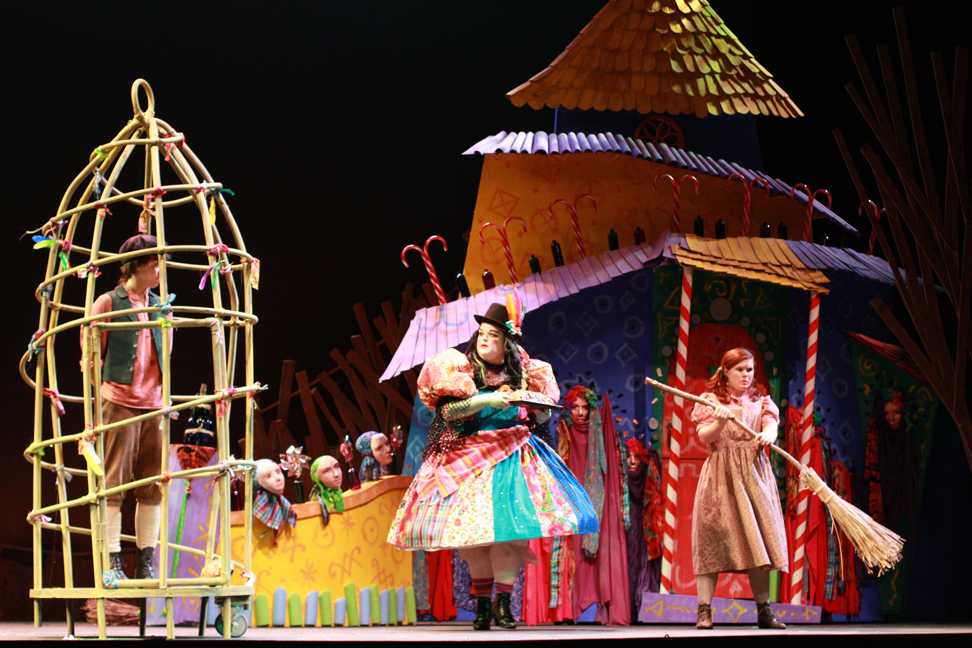 During Wednesday’s performance, Hänsel (Marisa Novak) is held captive by the Witch (Karen Jesse, OC ’04) as Gretel (Alexis Aimé) stands frozen. Superb singing and a powerful score helped build the onstage drama and made for an enjoyable listening experience.

Posthumous decapitation? Gesticulating at the audience with their child-sized fists as their parents kneeled in prayer in a blatant eschewal of religious themes? This was no kids’ story.

As soon as the curtain rose, a grim scene greeted the audience. The set, designed by Christopher McCollum, emphasized stark diagonal lines, drab browns and a general raggedness. The walls of the protagonists’ house were all tilted, and the trees outside were a messy collection of brown sticks. Likewise, the straw in the house’s brooms — the father character is a broom-maker — was rough and unkempt, and the table cloth was tattered, fraying at the sides. Punctuating the intensity on stage was an axe hanging on the back wall.

In regards to the acting, violence was the main tenet. The siblings Hansel and Gretel, played by double-degree fifth-year Nicole Levesque and Conservatory junior Emily Hopkins, rough-housed constantly in the beginning of the Friday night performance, with Gretel coming out on top more often than not.

But the mood sobered when their Mother, Conservatory junior, Hannah Hagerty, arrived home, put her bag on the floor and promptly smacked the two children on the head. Hagerty performance was powerful, as she seamlessly alternated between anger, stress, misery and, for a short, wonderful time, joy, when the father (Conservatory senior Michael Davis) brought home unexpected food. Davis, too, impressively toed the line between drunk, playful “tavern-cavalier” behavior and frightening abusiveness.

The music, under the baton of conductor Raphael Jiménez, was superb. Levesque, Hopkins, Hagerty and Davis, as well as double-degree senior Rebecca Achtenberg and Conservatory sophomore Victoria Davis in the smaller roles of the Dew Fairy and the Sandman showcased their rich voices with impressive tone and German diction. Particularly notable was the duet between Levesque and Hopkins in the serene “Abendsegen,” the evening prayer before the siblings fall asleep together in the forest.

Holistically and in solos, the orchestra was excellent. Moreover, there was a palpable connection among the entire ensemble, the singers and the orchestra together building the music’s drama as one. Interestingly, the aesthetics of the production didn’t coincide much with the score, which was indeed Romantic, though far more often brave or domestic in tone than dark.

There was no doubt, however, who the star of the performance was. From the moment she first snuck up on Hansel and Gretel to her inevitable demise in the oven, Karen Jesse, OC ’04 was stunning in the role of the witch. Whether singing enticingly of cakes and marzipan, gesturing alluringly toward her gingerbread house, attempting to charm a conflicted, hungry Hansel or shrieking with rhythmic laughter, she owned the stage.

The witch’s costume and the set for her house were both perfect contrasts to the production’s otherwise gloomy aesthetic. While in general the costumes were appropriately ragged —Hansel’s ripped corduroy shorts, for example — the witch’s ensemble was Costume Designer Chris Flaharty’s shining moment. Jesse sported clown face paint, a bowler hat with feathers and a dress sewn together from swaths of different fabrics, perhaps taken from the clothes of previously captured children. Against the brown setting of the woods, her house sported purples, greens, reds and blues and was adorned with candy canes, pin-wheels and faces sticking out of the walls. A very creepy Candy Land, indeed.

The production was enthralling, but a few weak points stuck out. While the use of a projection screen to depict a rising moon after Hansel and Gretel had fallen asleep was clever and effective, the moon’s bursting apart — with poor animation to boot — was rather cheesy and overly symbolic. And while some might call the scene in which angel children emerge from the woods and run around the sleeping siblings “cute,” a better word might be “tacky,” especially in juxtaposition to this extremely original production.

The most disappointing part of the production was the score at the moment when Hansel and Gretel push the evil witch into her own oven, vanquishing her — a moment of glory, or at least satisfaction. For the definite climax of the narrative, it was a bit of a musical dud. More energy seemed to be reserved for the explosion of the oven shortly thereafter, indeed a surprising spike in the drama but a fleeting and cheap one in the course of the denouement.

Of course, it is rare for an opera to completely nail its narrative, so a high standard in that department may be asking a bit much, but this was a particularly unsatisfying moment in an otherwise riveting evening.