Oberlin Races Ahead With NCAC Honors 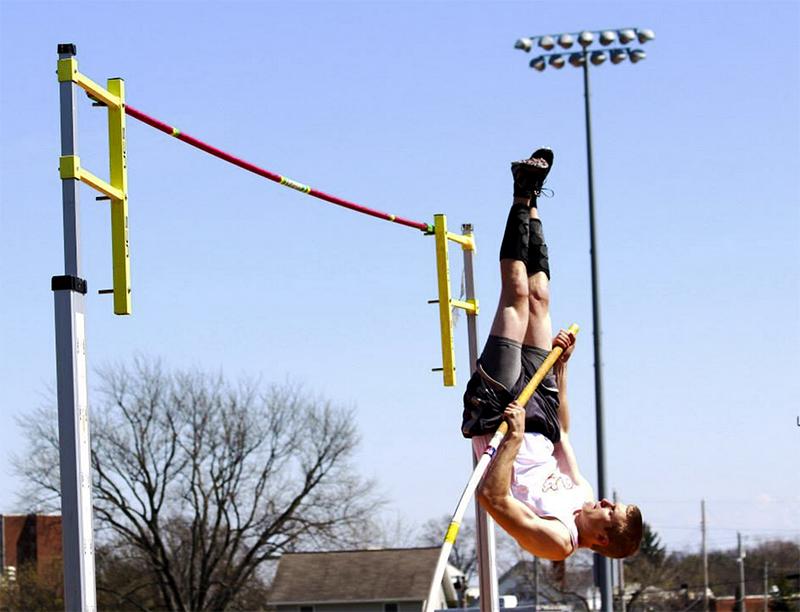 Junior Ben Venerdi propels himself over the bar during Oberlin’s spring 2015 season. The Yeomen and Yeowomen started their season strongly at Mount Union College, with sophomores Lilah Drafts-Johnson and Monique Newton earning NCAC Player of the Week honors for their performances.

The track and field team opened its winter season last Saturday in Alliance, Ohio, compet­ing in the Purple Raider Toy Drive Invite. Oberlin was joined at the invita­tional by host University of Mount Union, as well as Walsh University and Malone University, both Division II.

Oberlin fared well in its first meet of the year, with eight athletes recording top-five finishes, and two of those athletes earn­ing North Coast Athletic Conference Athlete of the Week honors for their performances.

Sophomore Lilah Drafts-Johnson took home the Ath­lete of the Week honors for distance and middle distance, competing in the 500-meter dash and the 1,500-meter relay. She earned second place in the dash with a time of 1 minute, 22.11 seconds, which helped her team finish in 4:17.27 for third place in the relay.

Drafts-Johnson was surprised that this race resulted in a conference award but was not unhap­py with the recognition.

“It’s funny to receive NCAC Athlete of the Week, because I feel like I’ve definitely had a lot faster and more important races that never received the NCAC’s attention,” Drafts-Johnson said. “But obvi­ously, no complaints. It’s an honor, especially con­sidering how hard I know my team and the rest of the conference work.”

On the track, three other athletes contrib­uted to Oberlin’s collec­tion of top-five finishes. Sophomores Annie Go­odridge and Rayna Hol­mes, along with first-year Imani Cook-Gist, rounded out the relay with Drafts-Johnson. Saturday marked a collegiate debut for Cooks-Gist, who added a fourth-place finish in the 400-meter dash with a time of 1:02.11.

The Yeomen and Yeo­women also dominated field events, with five ath­letes putting in top-five efforts. Sophomore Mo­nique Newton garnered NCAC Athlete of the Week for field events and broke a record to boot, win­ning the shot put with a school-record-breaking 14.29-meter throw.

While Newton appreci­ates the award, she said she is making sure not to get complacent so early in this season’s campaign.

“It’s very humbling to be given this honor so early in the season,” New­ton said. “I’ve been work­ing extremely hard, and this honor shows the hard work is paying off. I just want to keep the momen­tum going and continue to do well.”

Goodridge added to her hard work in the re­lay later that day, placing first in the long jump with a 5.20-meter leap and second in the triple jump with a 10.79-meter leap.

Senior Nathan Danko vaulted to a second-place finish in the pole vault with a 4.30-meter spring, while junior Ave Spencer finished third in the same event with a jump of 3.25 meters.

Another thrower who finished well was sopho­more Ana Richardson, who competed in shot put and weight throw. She earned a third-place fin­ish in the shot put with a throw of 12.35 meters and came in second in the weight throw with a 15.18-meter toss.

The team’s roster is currently very young and relatively inexperienced, with most of the athletes being first-years or sophomores.

Richardson sees the number of rookies as a positive for the pro­gram and looks forward to see­ing everyone grow into a cohesive team.

“A lot of our team are first- and second-years, which means we have a lot of time to grow together,” Rich­ardson said. “I have already had the pleasure of getting to know them and see them all work hard and pre­pare themselves for great things. I know the future of OCTF is bright.”

Oberlin looks to build on its ear­ly successes in the new year when it starts up the season in earnest. The Yeomen and Yeowomen will take the holidays off, but return to action on Jan. 8, when Oberlin hosts its annual Dan Kinsey Invitational.