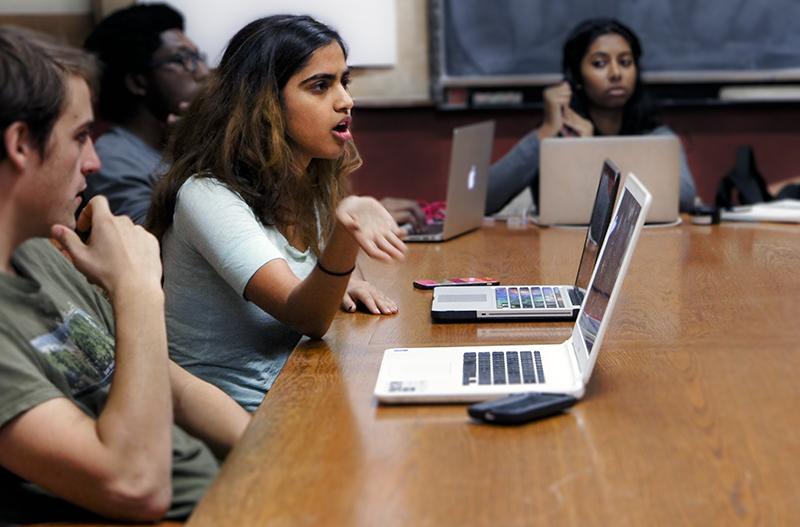 Student Senator and College sophomore Anjali Kolachalam speaks at plenary on Sunday. Senate, Dean of Students Eric Estes and the Board of Trustees have worked together to start a new Student Support Fund for small grants for low-income students.

A new fund to support students without the means necessary to front certain financial needs, such as fixing broken technology or paying for groceries over break, launched late last week.

Dean of Students Eric Estes sent out an email last Friday announcing the creation of a new $35,000-per-year Student Support Fund that will go toward financing students with specific needs that are not met by other current funds. The fund has provided financial assistance to 10 students over the past week, and will be in place for a minimum of three years.

“The earmarked funds will be more flexible and broadly defined than existing resources in order to prioritize the needs of students from low-income backgrounds,” Estes wrote in an email to the Review.

Students who want financial support from this fund apply directly to Estes.

“The goal is to make requests happen with as little bureaucracy as possible,” he continued in the email. “While all inquiries will be assessed on a case-by-case basis, the typical range of funded requests will be up to $500. Many students also share that often smaller amounts of support can make a huge difference.”

The Student Support Fund came out of feedback from the student body on how to best use the money donated by McGregor.

“Eric took it upon himself after some of the concerns raised by students during the Trustee Forum,” said Megs Bautista, Student Senate liaison and College fifth-year. “It was kind of this spur-of-the-moment thing in response to what students were interested in and what they were needing. I think it’s really important, and it has been a long time coming.”

Senate worked closely with Estes when coming up with the idea for the fund.

“I sent out a Google form to the whole student body for people to give suggestions on what the funding should be used for,” said Anjali Kolachalam, student senator and chair of the Student Support Initiative Fund Working Group. “And a lot of students wanted individual funding for little things. So Eric emailed me and Jeremy Poe and Meg[s] Bautista and was like, ‘Hey, do you think is a good idea?’ And at this point I’m looking through all this nonsense and thinking, ‘Wow, these students aren’t taken care of on campus.’”