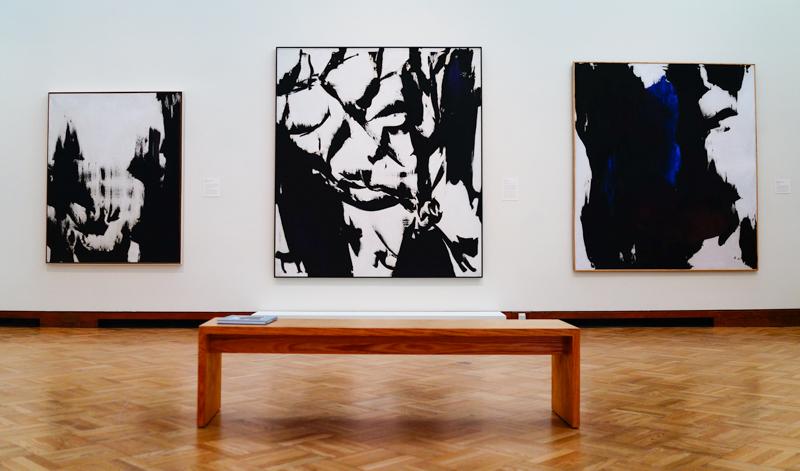 Judit Reigl’s Body of Music exhibit, the first retrospective of her work in the United States, is a visceral exploration of the forces that govern the human body and our autonomy. In an exhibit that opened Tuesday at the Allen Memorial Art Museum, her works embody our collective desire for freedom over our bodies and over the paths we walk in the world. Curated by Curator of Modern and Contemporary Art Denise Birkhofer with assistance from Mallory Cohen, OC’15, the exhibit runs through May 29 in the Ellen Johnson Gallery. Reigl’s art evokes a sense of darkness, timelessness and the primordial. She employs painting as a means of affirming human agency in the face of an indifferent universe.

In 1950, Reigl escaped the Iron Curtain of the Soviet Union and fled to Paris, finally freeing herself from the forces that had constricted her. After engaging with the Surrealists in Paris, she began to stray away from stylistic restraints and experiment with other methods of creation. Reigl practiced automatism, in which she used her body’s unconscious instincts to express herself in her paintings.

To put it in her own words: “It happens — rarely, hardly ever — in painting: The body becomes the instrument, precise and perfect.” Through the act of painting, the body is turned into a means of physical creation, through which energies can be contained, expressed and unified with the intangible.

Reigl’s exploration of contingency and accident is fascinating. Many of her works contain elements created without her control. Her Guano paintings started out as the accumulation of paint drippings on a canvas on her floor and turned into something prehistorically beautiful, like a cave painting that contains a cosmic secret.

Reigl’s Outburst series embodies a controlled chaos, like an explosion frozen in time. Thick, dark lines of paint contain passion in every stroke, appearing both accidental and intentional as large patterns in an unpredictable processes. The textures of these pieces create a sense of three-dimensionality; the paint almost bursts out of the canvas. These pieces are a powerful expression of the relationship between humanity and chaos, evoking feelings of beginnings and births.

Other pieces, like her Center of Dominance series, convey similar moods as centered energies and cosmic circles form a powerful life-force. This art feels both universally expansive and human at the same time.

The narrative progression of Reigl’s work is a particularly striking aspect of the exhibit. When observed chronologically, her creations reveal the gradual shift from the intangible to the tangible human form. In her Outburst series, the human element is merely implied; by her Mass Writing series, the human outline begins to take shape in negative space, asserting its right to exist in the spaces in between the void. These paintings were the most violent of the ones featured at the exhibit, reducing the color spectrum to a stark black and white with the dark bleeding into and almost choking the light.

Reigl’s later work, especially Facing, produced in 1991, stands out. These paintings contain her most realized human form, such as a shimmering golden outline of the ageless human stepping out of the void and into our realm. The last paintings featured were also Reigl’s most recent productions. They expressed a far more tranquil condition than the constant tension contained in her other art. Gentle, fluid shapes depicting birds and abstract, unfolding lines suggest that she has found peace in her old age. Perhaps she has achieved a higher sense of freedom and actualization.

Reigl’s Surrealist collages, however, leave much to be desired. They seem to lack the primal beauty of her other pieces, instead acting as diversions and cartoonish juxtapositions. Furthermore, her Untitled series resembled crude scribbles devoid of any kind of intent.

The significance of some of her more abstract pieces was not immediately apparent. What makes Reigl unique above all else is her awareness of her own freedoms — her self-actualization through evocative pieces of art that tap into her unconscious being. This brings light to the power that her style of expression can have on anyone willing to trust their instincts, to look inward and create.