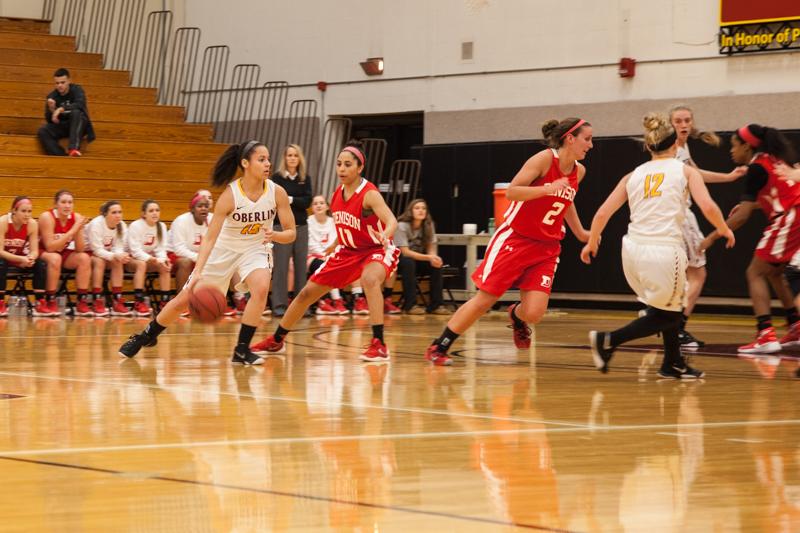 Junior guard Bri Santiago dribbles at the top of the key against the visiting Denison University Big Red Wednesday. Santiago grabbed four rebounds and two steals in the contest, but the Yeowomen were defeated to the tune of 45–44. The Yeowomen are now 4–8 in the NCAC and 10–11 overall.

With the loss, Oberlin now holds seventh place in the Conference, falling to a record of 10–11, 4–8 NCAC. The victorious Big Red stretched their win­ning streak to 11 games and advanced their record to 18–3, 11–1 NCAC.

The game was a back-and-forth tilt, featuring an unusual nine lead changes. Oberlin held Denison to just six points in the first quarter, which proved to be the largest deficit either team bore for the dura­tion of the match — Oberlin led 23–22 at the half.

Both the first half and final quarter of the game were marked by a steadfast defense and a struggling offense on both sides. While Denison’s offense failed to find a rhythm all night, they eventually cracked the stiff Yeowomen defense to retake the lead at the end of the third quarter 38–35.

Denison’s slim lead held for the majority of the fourth quarter. With just about 12 seconds to play, Denison led 45–44. Oberlin was unable to force a foul, as the Big Red passed the ball around the Yeo­women defense to wind down the remainder of the game clock on the final play of the game.

Head Coach Kerry Jenkins said he believes the Yeowomen could have capitalized on the close score at the end of the contest, but that offensive plans failed to come to fruition.

“There was a lack of execution,” he said.

Jenkins also cited technical confusion in the fi­nal quarter as responsible for breaking the team’s concentration.

“I think our players, anticipating that the refer­ees were going to blow the whistle, kind of stood up, and then they didn’t blow the whistle,” Jenkins said. “From there, everybody just got a little bit disoriented.”

Along with Parlor and Hamilton, senior guard Lindsey Bernhardt added six points. Despite the close loss, Bernhardt was pleased with the team’s performance, especially on defense. “We have been a little inconsistent in our defense,” Bernhardt said. “But we are starting to come together now, and I’m really hopeful and confident that we will be back.”

Denison’s Jordan Holmes proved why she is in the running for NCAC Player of the year, scoring 12 points with 14 rebounds. Holmes, along with the rest of the dynamic Big Red offense, was challenging to defend against, but the Yeowomen were successful in keeping her under her season average of 15 points per game.

Although the Yeowomen kept Holmes and Denison’s other play­makers in check, the Big Red defense kept the entirety of the Oberlin offense below their season scoring average of 57 points per game as well.

Junior guard Briana Santiago explained that, although the team’s offense didn’t score as much as they hoped, there were bright spots throughout the game.

“I think we hit a lot of big shots,” Santiago said.

“When everyone is able to [score], we normally do well,” she said.

While the team hosted the conference tournament playoff game last year, the goals are even higher this season.

“Our goal for the season is to play in the final four of the conference tournament,” Bernhardt said.

The Yeowomen have lost four games in a row and will need to con­tinue their strong efforts in their game next Wednesday, Feb. 10, at 6 p.m. on the road against the Allegheny College Gators.

Allegheny is a competitive team that will be a tough test for Ober­lin. The Gators defeated the Yeowomen 62–58 at Philips gym back on Jan. 23 in a nail-biting game, and are currently in fourth place — 10–9, 5–5 NCAC.

Despite the recent consecutive conference losses, Jenkins said he believes that, although the team has made mistakes, it is within their control to fix them in the final stretch of the season.