In The Locker Room with Josh Urso, Dan Bolotsky and Sarah Trutner 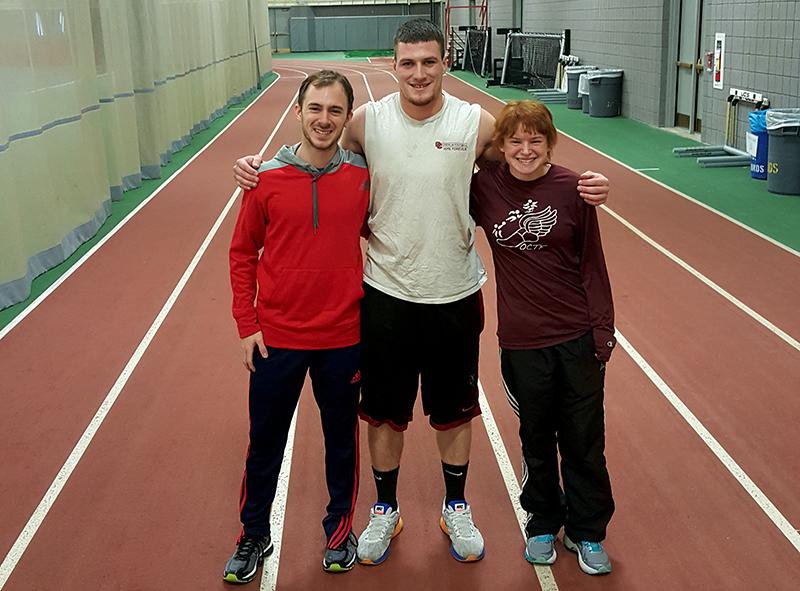 This week, the Review sat down with senior track and field captains Josh Urso, Dan Bolotsky and Sarah Trutner to discuss their events, spring season preparations and being part of the track and field program at Oberlin.

Can you each talk about the events you do?

Josh Urso: I run middle distance events which most often include races at the lengths of 400 meter, 800 meter, and 1600 meter.

Dan Bolotsky: I’m a thrower for the team. During the indoor season, I throw the shot put and the weight. During outdoors, I throw shot put, discus and hammer. My events are based mainly on strength and technique.

Sarah Trutner: I run the 400 and the 800, which are generally seen as either long sprints or mid-distance races. I like them both because there are so many different aspects to think about — speed definitely matters, but you can’t just sprint the whole race without a strategy, and you have to know what pace you can hold without slowing down too much at the end. The speed-endurance balance and the mentality required for mid-distance races make them my favorite.

What did you do before the season to prepare?

JU: Before the start of the season, I continued training after my cross country season ended in the fall so that I would be physically able to perform at my best for the track seasons.

DB: I also play football for the College, so my training is a little bit different than most track athletes during the fall. Through the summer and fall I’m committed to the football team, and the only real training I can do for track is occasional drill work.

ST: I did cross country in the fall before track season started, so most of my training before the season was focused on longer distances. There was a little time between the end of cross country and the start of track, but I spent a lot of that time cross-training on an elliptical rather than running. It’s very easy to get injured during cross country and that can carry over into track, so taking the time for injury prevention is usually a good idea.

Can you talk about Coach Appenheimer and the impact he has had on you?

JU: Ray has had a profound impact on me, in my life in and out of athletics. The successes I have being a student-athlete at Oberlin College could not have occurred without the guidance of Coach Appenheimer.

DB: I don’t deal directly with Coach Appenheimer as much as the distance runners do as I mainly work with Coach Hepp, the throwing coach. From the time I do spend with Coach App[enheimer] I’ve found that he is not afraid to tell it like it is and give athletes tough love. With that being said, he truly cares about his athletes and wants them to succeed on and off the track.

ST: I only work directly with Ray during cross country, but I think he’s a great person and a fantastic coach. He’s always very honest and clear about his expectations, but will also take the time to listen to what people have to say and work with them on any concerns. I think he sees track and cross country as places to learn life skills rather than just sports, so he encourages community and personal growth whenever he can.

Are there any meets you look forward to in particular? Why?

JU: I am particularly excited for our indoor conference meet, which will take place at Kenyon. Conference is exciting because it is the pinnacle of most people’s seasons, and it provides the platform for people to put out some of their best performances, which is always fun to see.

DB: I’m definitely looking forward to the conference meets, both indoor and outdoor this year. On a personal note, this year the throwing fields are very competitive and there are about four or five guys who are in a position to win the conference. I’m very excited to be in that group and to show off all the hard work I’ve put in throughout my four years here.

ST: We usually look forward to particular meets based on either whether the track is comfortable to run on (the difference is generally noticeable), whether the meet is run smoothly (some can be very inefficient) or whether the competition is close enough to our level to make the meet challenging and fun, but not impossible for us to be competitive. The meets within our conference tend to have a pretty good combination of these, but I don’t know if there are that many [meets] that people look forward to well ahead of time.

How has the season been going so far, and what must the team do to be successful the rest of the way?

JU: As a team, we have been doing well, but [the season] is not over yet. In order to perform at our best, we must continue to work hard and maintain focus as we have for the beginning portion of the season.

DB: The season has been going really well so far. We’ve had a lot of school records broken already and lots of people getting lifetime bests in their events.

ST: I think the season has been going well so far. A lot of good athletes have graduated in the last year so that has had an effect on how well we tend to do overall. It’s also difficult to tell just by the scores, especially during Winter Term, just because the number of points you get depends heavily on how many people you have to start with. But we have gotten to see a lot of great performances so far, so I think we’ll be just fine when the conference meet happens.

What got you interested in being a part of the team?

DB: I’ve always been a very competitive person, and I’ve felt that track was a place where I could be competitive and have success.

ST: I’ve done track since high school, and there are a few reasons why I decided to continue in college. I like having time set aside to do something other than school, and it’s nice to have something in my schedule that makes me keep moving and challenging myself in a way that’s different from academics.

What is your favorite part about track?

JU: My favorite part about track is the feeling of competing and the camaraderie that you gain by being a member of a track and field team.

DB: The thing I’ve found most interesting about track is the different types of athletes that take part in this sport. In football there are different positions, but there are general skills that every football player possesses. In track there are distance runners, there are sprinters, jumpers, throwers. Everyone has their own talent, and I love watching everyone showcase this.

ST: Definitely the team. The sense of community on this team is fantastic, and I am always grateful to have gotten to know so many smart, creative, hardworking, supportive and hilarious people. They’ve all given me so much over the years, and I just hope I’ve managed to do the same for them.