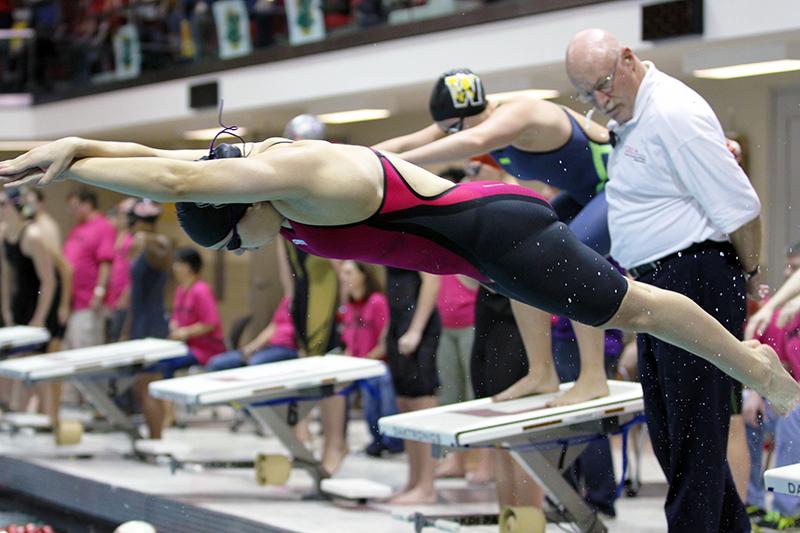 Oriene Shiel vaults off the platform in the 400-yard individual medley. Shiel finished the B-Finals with a time of 4 minutes, 45.20 seconds, contributing to a fifth-place finish overall for the Yeowomen in the North Coast Athletic Conference Championships last week.

The men’s and women’s swimming and diving teams concluded their season this past weekend with a grueling four-day test of their training in the form of the North Coast Athletic Conference Championships in Granville, Ohio.

After pushing his team’s physical limits all sea­son, Head Coach Andrew Brabson stressed rest and healing as his team tapered off to prime them­selves for Conference competition. Focus on mus­cle building and speed turned towards perfecting technique.

“We train hard all year, and the last three weeks or so is all just about getting some rest and then fine-tuning some of the details,” Brabson said. “Whether it’s working on your turns or working on your start, ultimately the last couple weeks of preparation is about getting the body rested and ready to go.”

With thorough preparation under their belts, both the Yeowomen and Yeomen anticipated im­pressive results at the competition, an expectation turned reality as both squads recorded impressive individual and group performances throughout the tournament.

One notable showing came on day two of the championships in the women’s 200-yard free relay when the team of junior Nora Cooper, first-year Elsa Mark-Ng and seniors Jill Sarazen and Samma Regan set a school record with a time of 1 minute, 39.27 seconds. Later in the day, sophomore Adam Winikoff would do his part for the Yeomen by set­ting a school record with a time of 21.01 seconds in the men’s 50-yard freestyle, which qualifed him for the B-Final.

Winikoff acknowleged that breaking his previ­ous 50-yard freestyle record had been a personal goal.

“My strategy heading into the meet was to just go out as fast as I could and pray that my training was good enough,” Winikoff said.

There was no shortage of memorable moments on day three of the NCAC championships. The men’s 200-yard medley consisting of Winikoff, ju­nior Nils Gudbranson and first-years David Bright and Jacques Forbes, set a school record with a time of 1:35.69. Forbes had another impressive perfor­mance later in the day when he finished first in the 100-yard backstroke with a time of 55.37.

On day four of the championships, junior Kath­leen Falk qualified for the A-final in the two hun­dred backstroke with a time of 2:08.18. She would be the lone member of both the men’s and women’s swimming teams to qualify for an A-final.

Despite both squads turning out some of their best performances at the championships, stiff competition ensured that Yeowomen finished fifth overall, and the Yeomen concluded the conference competition at ninth.

Head Coach Brabson had nothing but high praise for his team’s efforts over the weekend. “Adam Winikoff had a great meet,” Brabson Said. “On the women’s side, Oriene Shiel and Kathleen Falk both dropped a lot of time and had some pretty huge performances, placing in the top nine in the conference.”

Oberlin swimming and diving concludes its regular season Saturday at 1 p.m. when they travel to Gambier, Ohio, to compete in Kenyon College’s Fast Chance Invitational for a chance to qualify for NCAA competition.