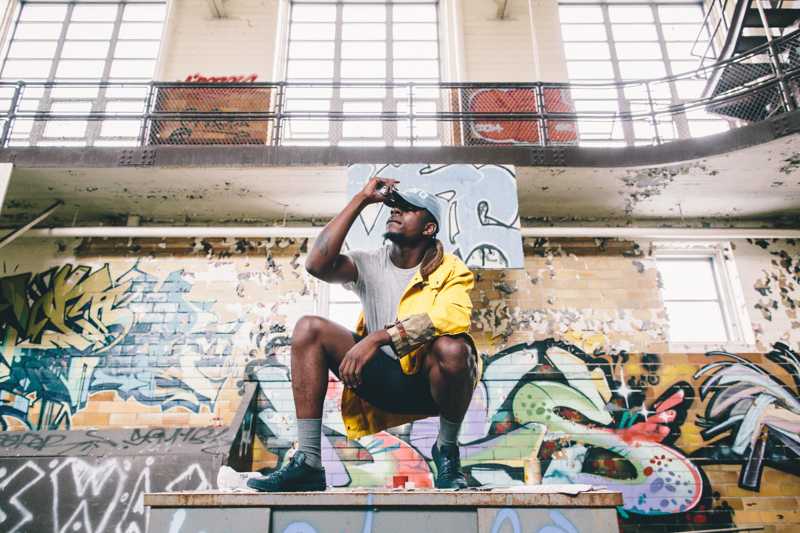 Mick Jenkins poses before a wall covered in street art. The Chicago rapper, who garnered praise for his 2014 mixtape The Water[s] and his 2015 EP Wave[s], will perform with Oberlin electronic musicians Xuan Rong and Aten Rays at the ’Sco tonight.

Chicago-raised rapper Mick Jenkins, who will perform at the ’Sco tonight, has skyrocketed to the forefront of underground hip-hop over the last couple of years thanks to the successes of his 2014 mixtape The Water[s] and last year’s Wave[s] EP. The show will feature opening performances by electronic musician composers Xuan Rong, College junior Rachel Katz, and Aten Rays, College sophomore Luke Nikkanen.

Though Jenkins is just 24 years old, he has released a steady stream of mixtapes since 2012. While his early work never garnered much widespread recognition, it did earn him the attention of Chicago rap scene luminaries, and in 2013 he got his first big break collaborating with fellow Windy City heavyweights Vic Mensa and Chance the Rapper. The song they crafted together, “Crossroads,” is a moody, solemn hip-hop track that helped solidify Jenkins as a leading figure among up-and-coming Chicago emcees.

Jenkins capitalized on his newfound popularity with the release of The Water[s] the following year. It is his longest and by far his most cohesive project to date. A concept album about the rejuvenating powers of water, the mixtape showed off his lyrical prowess as well as his ability to visualize and execute a specific concept. It also displayed a deep level of focus, with the project maintaining a moody production aesthetic throughout the hour runtime. The Water[s] was released for free online and has been downloaded over 100,000 times on Hotnewhiphop.com. It was also a critical success, earning a four out of five rating from XXL Magazine and a spot on both The Needle Drop’s “Loved List” and “Best of 2014” list.

The Water[s] revolves around water as an all-powerful but often under-appreciated element perhaps analogous to how Jenkins sees himself below the surface: an under-appreciated rapper who has repeatedly proved himself as a force to be reckoned with. “Just before you forgot about him / Overlooked or started doubting / I doused it with the flow and started talking all this water shit / It’s like I started drowning,” he raps in “Martyrs” over skittering hi-hats and a stark, distant guitar lead. He knows he’s been overlooked in the past, but his aquatic philosophies have started turning heads. “Trying to find his way and then he bringing pain, you better know we major / I’m on this water heavy, what’s a little gold and a pager?” he rhymes on the mixtape’s hard-hitting closer “Jerome,” a collaboration with fellow young emcee Joey Bada$$, who performed at the ’Sco last year. The “gold and a pager” line is pulled straight from N.W.A.’s “Fuck tha Police,” but Jenkins references it as the type of materialism he is not interested in. He values enlightenment and knowledge over money and commercialization — water over gold.

Some listeners may find water an odd topic to base an entire album on. Mick addresses this concern in “Alchemy,” the opening track to his 2015 EP Wave[s]. “They say I be talking ’bout water too much / You hear that?” he raps, and then, after a long pause, he laughs and says, “That’s how many fucks I could give.”

Xuan Rong, who will open for Jenkins, began playing piano at age three and the violin at 10. She played only classical music for the majority of her life but began making her own music in the summer of 2014. Last May saw the release of her debut EP, Myria. Her music features eerie electronic instrumentals, rich sounds and whispery vocal manipulations. She cites artists like Grimes, FKA Twigs, Sigur Rós, TOKiMONSTA and Odesza as influences. Rong has previously performed at the ’Sco as well as at various houses on campus. Today, she will be debuting tracks from her upcoming EP, slated for release in March.

Aten Rays incorporates a variety of genres into his music, including the thundering bass drops of EDM that makes for good dance music and extremely textured, dense percussion. Despite only releasing a handful of tracks online, he has amassed a huge cult following, garnering hundreds of thousands of plays as well countless positive comments from fans. He credits artists such as James Blake, Jai Paul, Flying Lotus, J Dilla and Exuma as influences. He has previously performed at Storage as well as at various house parties, but tonight will be his ’Sco debut. “I’m excited to be sharing the stage with a rapper I really respect,” Rays said. He listed “Your Love” as well as collaborations with producer Kaytranada as some of his favorite Jenkins songs. “I think it’s going to be a really interesting mix of styles and energies, and [it] should definitely be experienced by the Oberlin community,” he said. Aten Rays is currently working on his debut EP and hopes to release it with a series of accompanying visuals by early summer.