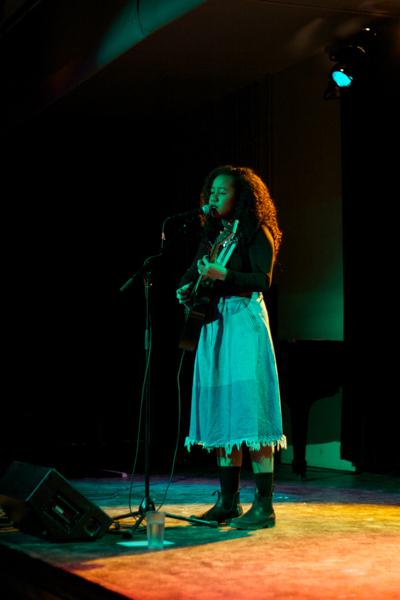 Singer-songwriter Nakaya strums her guitar as she serenades an audience at the Cat in the Cream. Her music flaunts a mixture of folk, R&B and electronic influences, and  explores themes of girlhood and self-love.

The lulling drone of pre-show chatter immediately ceased as Nakaya, cast in blue light, took the stage at the Cat in the Cream on Saturday night. She began her set with “Dear Skin,” a hauntingly mesmerizing track from her newest EP, Out of Breath. Airy acoustic guitar riffs paired with Nakaya’s echoing vocals, sending a message of self-love as she addressed her skin in a rhyming, ode-like form. “Dear skin, you are so lived in / Dear skin, forgive my flaws / I’m sorry for the pain I’ve caused,” she sang.

Her songs speak to how, as a queer woman of color, she works to combat systems of oppression by finding self-love. “I didn’t want to feel different, I wanted to feel like I mattered, like I belonged somewhere,” she said in an Instagram post. “I think being a Black woman in America just sets you up to feel continually inferior, and I’m learning and trying every day to feel a bit stronger and more beautiful, for myself.” Nakaya’s feelings of disconnection between how she is perceived by American society and how she perceives herself are certainly felt in her lyrics.

In a billowing denim skirt and chunky Dr. Martens, Nakaya exuded warmth and delight as she discussed her arrival to Oberlin, which she said was unsullied despite difficulty fitting her guitar into overhead storage on her flight. Laughter filled the Cat in the Cream as Nakaya affably engaged with the audience before her cover of “Love Song” by The Cure, which she lauded as one of her personal favorites. Her dreamy cover captivated the audience into a stillness that was only disrupted by bursts of applause at her final guitar stroke.

Nakaya sang about the simple, blissful comforts of childhood in the performance of her song “Mother.” Imagery of playground swings, a mother’s caresses and imaginary trips to the moon recalled the euphoric ease of childhood through her lyrics and light-hearted acoustic guitar strumming. “I was wondering if the swings will let me back to play, and I was wondering if I’ll be okay,” she sang. Her hushed vocals and playful rhymes were reminiscent of those on Karen O’s solo debut album Crush Songs. Both singers play with the simplicity of the folk genre to articulate powerful messages about their multifaceted identities. “Mother” and Crush Songs both speak to an unabashed embracing of girlhood and femininity that remains underrepresented in folk music.

Despite folk’s basic form, Nakaya’s presence as a Black woman within the genre’s industry is far from simple. Nakaya cited Bon Iver as one of her main sources of inspiration prior to covering their song “Re: Stacks.” Nakaya’s praise of the group speaks to the current racial and gendered standard accepted in folk. Justin Vernon, the primary songwriter and frontman, is seen as a figurehead of modern-day folk, and white men like him dominate the genre. Folk has been systemically whitewashed throughout history despite its origins in Black bluegrass and blues music. As a Black woman, Nakaya plays a critical role in the reclaiming of folk music, reflected in lyrics like “When the clock ticks I’m reborn,” in “Dear Skin.” Nakaya’s lyrical content stands at odds with the hyper-masculine, “lone man against the world” rhetoric present in much of today’s folk music. Her music reclaims folk as a genre where the experiences of Black queer women can be expressed and celebrated.