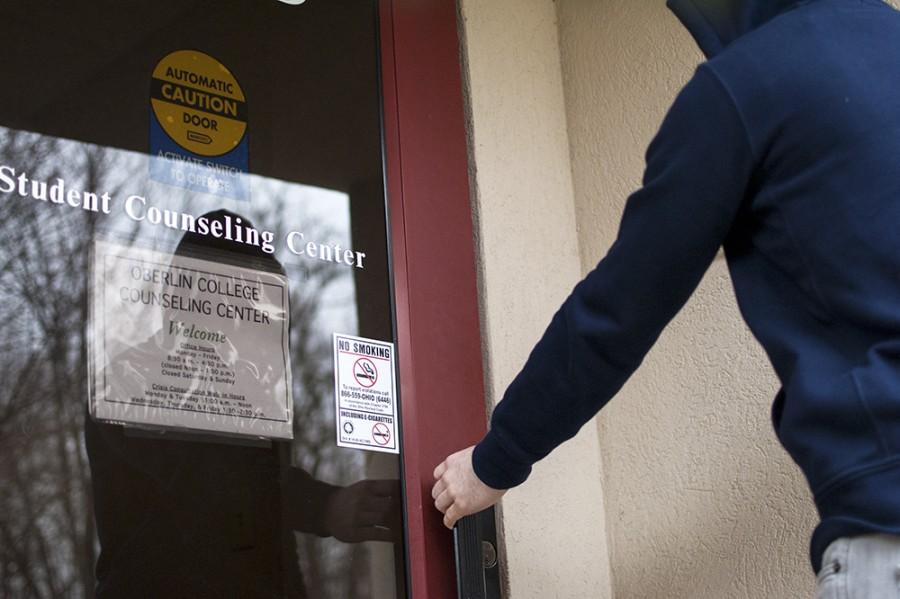 A student walks into the Counseling Center. Oberlin’s Office of Disability Services has recently expanded accessibility services to include a study and dining program.

The Office of Disability Services has implemented two new programs this semester to improve and publicize assistance available for students registered with the office. One of these new programs is Studying Independently Together, Tuesdays in Mudd library.

“We have actually started this [within the last week] and are already getting a good response,” said Jane Boomer, director of the Office of Disability Services.

Another program, held Thursdays in Stevenson Dining Hall, reserves a room for students registered with ODS to eat dinner together.

These events will take place throughout the rest of the semester in ODS’ attempt to make its services more accessible. During Austism Awareness Week, the week of April 17, ODS will also bring speakers to campus.

Disability accommodation is a major part of campus discussion. There are many programs, workshops and trainings centered around the idea of creating a healthy environment and maintaining an accessible campus.

At both weekly events, Student Accessibility Advocates are present to help stimulate the conversation and foster a welcoming environment. SAAs are disabled upperclassmen students hired through ODS, who feel that they can help others transition to college. The program started four years ago with only five SAAs. Now, there are nine, each of whom meets with six students.

ODS sends out anonymous surveys at the end of every academic year to ensure that the program remains successful and continues to achieve its goals.

The program is intended for first-year students and some sophomores who choose to continue working with advocates. SAAs have a week of training before school starts. Their job is to help connect students to resources on campus.

The group assists students with the challenges of adjusting to a collegiate lifestyle and acts as a mediator between students and institutionalized methods of disability services.

According to Boomer, 669 students on campus have reported disabilities to ODS. Incoming first-years constitute 146 of these students, 67 of whom reported psychological disabilities.

“Students are coming in knowing that they can have accommodations through the Office of Disability Services,” Boomer said.

Currently, the Counseling Center and ODS are streamlining their efforts in an attempt to improve both offices’ relationships with the student body as inclusivity at the College intersects with accessibility and advocacy.

There are currently three psychologists, two postdoctoral residents and one consulting psychiatrist in the Counseling Center. The Center is currently looking for a full-time counselor of color to replace a post-doctoral position that was removed.

“Of the four psychologists we have on staff, three are women of color,” said John Harshbarger, director of student health and counseling services at the Counseling Center. “We had two openings as of last year; we had two psychologists who left. In the hiring process, it was a priority for our center to do our best to attract counselors of color.”

Harshbarger said that inclusivity and comfort is extremely important to the Counseling Center, as so many students utilize its resources.

Around 25 percent of students on Oberlin’s campus use services like ODS or the Counseling Center, according to Boomer and Harshbarger. Both recognize that the distance between facilities and more targeted regions of campus poses issues for many students.

“I’m always amazed at the number of students who do come, given our location,” Harshbarger said. “Over the past five years [we have] looked at the possibility of putting Student Health and the Counseling Center in a more central location. It’s just a matter of finding space.”

Historically the Counseling Center was located in Peters Hall, said Harshbarger, but, when the current location opened, the administration moved both Student Health and the Center. While the building is a great space for both centers, it isn’t an ideal location in terms of student accessibility.

College first-year Anna Kucher, arts and culture editor of The Grape, has been polling students on campus about their opinions on mental health policy on campus.

“The current resources provided by the College are clearly not serving the student body as well as they should be,” Kucher said. “Perhaps the largest and most obvious change that could be made is moving the Counseling Center closer to campus.”

Students of all years and divisions are involved in making the campus more accessible. However, they have been focused on utilizing the little funding and few counselors and psychiatrists that they do have on improving the Center itself first.